The History of Benton County

Benton County (2010 population 38,451) was one of the original nine counties established by the territorial legislature in 1849 and was one of the three which were declared organized. Originally, it was about one hundred miles in length and nearly forty miles at its widest point. It was reduced to its present size between 1856 and 1860. The county was named in honor of Thomas Hart Benton, a senator from Missouri, who worked diligently to have Congress enact the Homestead Act. He thus endeared himself to many settlers and several counties were named after him in the United States. 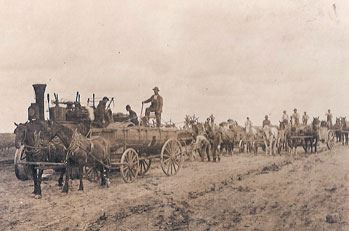 Agriculture and dairying, logging, lumbering, granite quarrying and manufacturing have been active industries in the past. The timber and granite supplies have been depleted, so the lumber and granite industries have become defunct. The economy was based mainly on agriculture and dairy farming for many years. In recent years, industrial parks have been established in Sauk Rapids, Foley, and Rice to attract industry to the county. A large expansion project is in progress at the St. Regis Paper Mill in Sartell.

When the first explorers came to the county, it was ranged by the Sioux and Chippewa Indian tribes. Explorer Zebulon Pike passed through what would later become Benton County in October of 1805. Pike, a Lieutenant in the U.S Army, was sent by the federal government to map the Mississippi River and Its tributaries, establish relations with Native American tribes, scout potential locations for military forts and locate the source of the great river.

Pike left St. Louis with 20 soldiers on August 9th and arrived at what he called the “grand rapids” (now known as Sauk Rapids) on October 10th, 1805. In his journals, Pike described the difficulty he and his men had in getting their large wooden boats over the Sauk Rapids and the Watab rapids further upstream (The Watab rapids were later submerged when a dam was constructed in Sartell). It took Pike’s detachment 6 days to travel from Sauk Rapids to a spot between Royalton and Little Falls, where winter ice forced them to make their winter base camp. While traveling up the river, Pike and his men managed to shoot numerous geese, ducks, deer and a wolf to sustain them. Pike noted the fine quality of the water in what he called the “Clear River”, which is now known as the Platte River. Pike returned to this location to hunt during the winter of 1805.

Pike was determined to shoot an elk; he saw herds of up to 150 of these animals in what is now northwestern Benton County.  Pike and one of his men shot several elk, but their relatively small caliber flintlock rifles apparently lacked the punch to bring the big animals down. In his frustration, Pike one day chased a wounded elk from the mouth of the Platte river eastward for four miles and then south, passing “many droves of elk and buffalo in the middle of an immense prairie“. As nightfall approached, Pike reached a lake about 5 miles long and two miles wide (presently called Little Rock Lake) and saw “immense droves of elk on both banks” Here, Pike was finally able to down an elk, but he and his companion had to drag the carcass about a mile towards the river, “the wolves feasting on one half, while we carried away the other.”

The first white settlers chose the land along the Mississippi River. The earliest settlement was established in 1848 by David Gilman in Watab. He established a trading post at that place. Jeremiah Russell arrived in 1849 to take charge of the American Fur Company's trading post in Sauk Rapids. Settlement expanded into the interior of the county in the eighteen-sixties and seventies. Yankees and immigrants from several European countries settled in the county in the nineteenth century. The most predominant ethnic group was the Germans, who developed the area around Duelm and Mayhew Lake. The second largest nationality represented in the county are the Polish. "Alberta Colony" was promoted by several prominent Poles in Chicago. It grew quickly after 1877. This area, around the community of Gilman, is still the most recognizable of the county's ethnic communities. The Scandinavians are the third largest group; they settled mainly in the southern and eastern parts of the county. Smaller groups of Irish, Belgians, French, and French-Canadians had small settlements also.

The county seat is at Foley. Originally, the seat was at Sauk Rapids, then moved to Watab in 1856, and back to Sauk Rapids in 1859. A move was started to transfer the county seat to Foley, causing much rivalry between the towns of Foley and Sauk Rapids. An election was held in 1901. The results favored moving the seat to Foley by a vote of 1284 to 788. The present courthouse was built in 1902 and 1903. Additions were built in 1974 and 1981 and the interior has been remodeled. 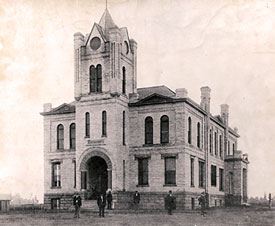 Historical attractions in the county include Peace Rock, which is a large granite outcropping along the Mississippi River in Watab Township. It was named Peace Rock in 1832 by Henry Schoolcraft when he charted the Mississippi. It was so named because it marked the 1825 boundary between the Chippewa territory to the north and the Sioux lands to the south.

The church of Saints Peter and Paul in Gilman is a highly visible architectural landmark of Polish influence in the community. It has been nominated to the National Register of Historic Places.

The Benton County Historical Society and Museum, located at 218 First Street North in Sauk Rapids, depicts the story of the development of Benton County through the use of artifacts, pictures, and printed materials. It is open year round Monday - Friday, 10 a.m. to 4 p.m. Closed for all holidays.